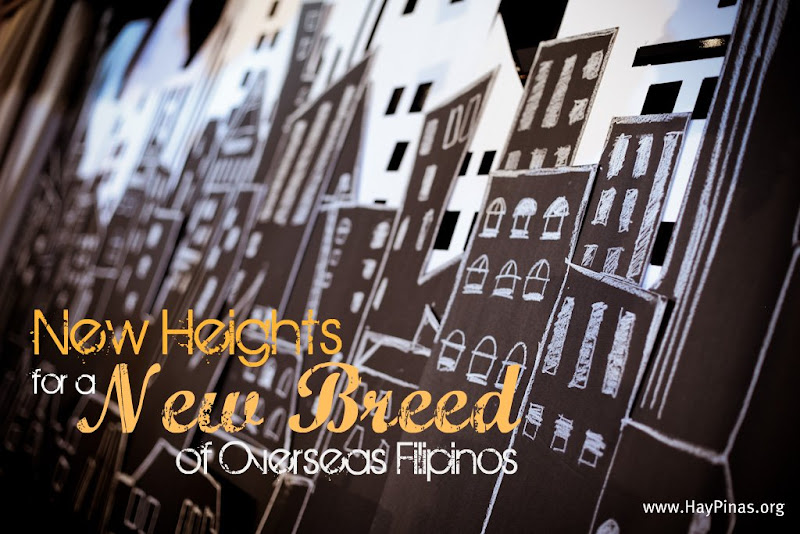 Anne Quintos' conversations with fellow overseas Filipinos, whether on a plane ride, while at church, or even in email, usually end up with the longing sigh for the country: "Hay Pinas!" Chances are, if you're an overseas Filipino deeply wanting to go back home, at some point, you have found yourself uttering a similar, if not the same, phrase.

And weirdly enough, that's also the same phrase she often hears Filipino say back home when it's out of frustrations and even desperation. When tax cuts were so unreasonably high, her friends would say: "Hay Pinas!" A few months later,  Anne would hear that her disheartened friends have flown to other countries to try their luck.

While waiting in the immigration lines at NAIA, you'll hear some Filipinos who have been used to less bureaucracy in their adopted first-world countries rant "Hay Pinas talaga!" Indeed it's a love-hate relationship we all have with our society. However, at the end of it all, the desire to be home trumps all the things we'd like to escape from.

Hay Pinas! is a call to action for Filipinos everywhere. From an extreme of two raw emotions (longing and frustration), we encourage overseas Filipinos to conquer new heights for the Philippines. Our society's archenemy is not anger or too much idealism. It's apathy. For many people, including government leaders, going abroad for the proverbial greener pasture has been a panacea for the many problems in the Philippines.

But as our credo goes: We have left but we're not running away. This channel is a way for us to give back and return to our roots. Let us all:

Above anything else, we believe that patriotism is borderless. Our privilege of living in a modern world, where technology easily connects us together, gives us endless opportunities to learn and reach out. Now, the brilliant minds who left our country can continue to contribute their ideas and share the knowledge they have acquired through their overseas experiences.

Support our cause and mission. There are a lot of ways to join us. You can be a country correspondent, or be part of our Facebook and Twitter community. In the near future, we'll also need help in launching small initiatives such as conducting financial literacy seminars and producing more helpful web videos.

Currently, we are a small group of Filipino professionals based in Taiwan. Someday, we want to grow our community with more people willing to share their knowledge and time. We most welcome you to Hay Pinas!, a community portal for a new breed of overseas Filipinos.