Baby on Board while Abroad: 3rd Trimester Survival Guide 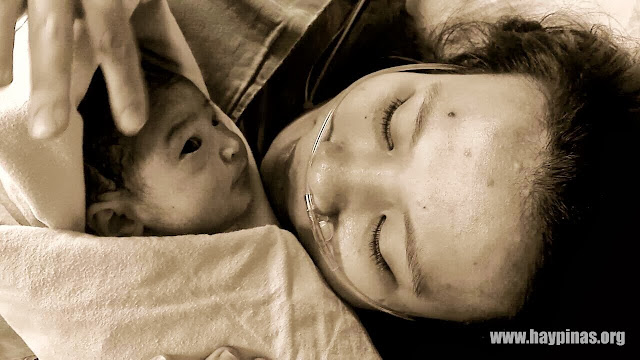 I've always wondered why it takes so long for women to carry their offsprings in their wombs. Sure, other animals like dolphins and sharks have longer gestation periods. For perplexed young adults like me, however, nine months seemed like an eternity to bear.

Now that I'm pregnant, what I thought was an eternity seemed to move like a speed train. And pregnancy, like a speed train, has been exciting, nauseating (literally!), expensive, disorienting, and amazing! This is why I would like to share my story, hoping to shed some guiding light for overseas Filipino moms-to-be. Even though it can be quite a struggle to get pregnant abroad, it's definitely all worth the ride. (Read first trimester and second trimester posts.)

7th month: Shopping for the baby

Our shopping list got longer. Who could ever blame first-time parents? We were so excited that budget seemed irrelevant during the waiting game. Looking back, however, this excitement of buying (a lot of) stuff was not a new feeling. And neither was it solely for newbie parents. For overseas Filipinos who have been away from home long enough, balikbayan shopping is also the way to ease the excitement and at times, compensate for the time lost.

Because we felt we're accumulating a lot of little things that will be easily outgrown, I knew that listing it down wasn't enough. I had to set the following:


I had wins and losses over this shopping for the baby challenge. We had limited toy purchases to a minimum. But lessons came as soon as baby was born. Baby didn't like to be in the nice crib that we bought. Instead, she often enjoys her time in the secondhand cradle we graciously received from a co-worker.

And then there were worries about finances and the biggest word ever: Future. Where do we raise her, abroad or back home? If back home, will our salaries and investments cover her needs? Breathe in, breathe out.

They say it's normal to be scared and worry about what's going to happen for you and your baby. I blame it on my pregnancy hormones, physical strain, and lack of sleep. And perhaps, it's my second nature to worry. When it got a little bit crazy, that's when I told myself to restrain from thinking to much and put my trust in God. Of course, my husband and my mom didn't fail to reassure me that everything will be alright.

The waiting game is nearly done and my husband and I are more excited than ever. We also have conquered some of our fears and managed to resolve most items in our to-do list. "Is this really happening?" I kept asking myself. "I'm officially a mom."

Speaking of being a mother, my mom graciously offered her help on our D-day. She said that while I'm on my maternity leave, she can help me with the baby and chores. Because Taiwan is just a few hours away by plane, she booked her flight tickets without hesitations.

My delivery was on schedule. Our daughter was born a day after the Chinese New Year. From the moment she arrived, all the pain and worries were instantly replaced with absolute happiness and calmness. Things were clear: We, as parents, want to give her the best.

And that is where we begin a new journey of parenthood.
Read More 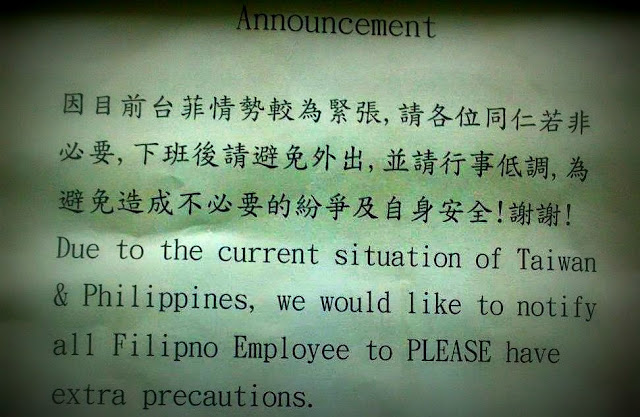 My wife and I hailed a cab and with our very limited Mandarin we figured that what's blasting on the radio was rabid commentary about the Philippine-Taiwan conflict. In a country where pet grooming makes it to primetime news, the killing of a sixty-five-year old Taiwanese fisherman by the Philippine Coast Guard sparked a media frenzy. We just kept quiet and toyed with our smart phones to avoid conversation with the driver. As OFWs, our rule of thumb is to always try to blend in to avoid being singled out.

On my Facebook wall, links were being shared about how a Filipino migrant worker in Taiwan was reportedly beaten at a train station as a result of local outrage. Another Filipino was said to be ganged up by four Taiwanese and hit with a baseball bat. Elsewhere in the East Asian island, Filipinos were being refused to be sold at some groceries and were shouted invectives at. The tension was bad enough that some factories issued warnings to its Filipino employees to avoid places usually associated with the Philippine community. The Taipei mayor also called for cooler heads among the locals and even deployed extra police near where Filipinos gather to avoid more commotion.

These developments were a surprise since the Taiwanese are generally polite. In the more than three years that we've lived in Taiwan, we had limited experience with racist or discriminatory behavior. Some say that the shooting incident hit a raw nerve, especially since the Philippines had again wrongly invoked the One China Policy in its diplomatic dealing with Taiwan.

Four things were demanded from the Philippines: a formal apology from the government, compensation for the family of the killed fisherman, penalty for the armed force personnel responsible for the death, and talks of a shared fishing boundary. If any of these will not be met within three days, Taiwan promised tough sanctions against the Philippines.

The flaming rhetoric used by Taiwan President Ma Ying-jeou in discussing the incident received mixed reaction. A segment cheered on that it's time to assert Taiwan's border rights, while some said that the demands were merely a political stunt because the Taiwanese president has falling popularity rating. On the other hand, the seeming inaction by Philippine President Benigno Aquino Jr. was attributed to his busy schedule campaigning for allies in the freshly concluded Philippine mid-term elections.

The three day deadline lapsed, which was hardly enough for a full-blown investigation. Rejecting the apology conveyed by the Philippine envoy as not sincere enough, Taiwan froze the hiring of prospective OFWs and sent back Manila's top consul. A second wave of sanctions ensued, including a red alert advisory for travel to the Philippines, suspension of economic and cultural exchanges, and navy drills near Taiwan-Philippine borders. This despite some $6.7 billion in trade deficit between the two country in favor of Taiwan.

Filipinos abroad and at home took to the Internet to protest. Some were angry at the Philippine government for being incompetent in dealing with the crisis. Some congratulated the Aquino administration for taking a stand against perceived intrusions to Philippine seas. But mostly, people were worried for the safety of OFWs based in Taiwan. We ourselves had relatives and friends calling or messaging to ask if we're OK.

Freeze hiring of Filipino workers was the knee-jerk reaction from the Taiwan government. It seems that as a receiving host, it forgets that labor migration is a two-way street. Taiwan with its zero percent population growth needs workers from other countries to man its many factories and to care for its aging population. Aside from having a reputation for being hard working, Filipinos possess basic English skills that enable them to figure out labels in complex machinery - a task that other counterparts in Southeast Asia couldn't master so well. Some observers claimed that the tech industry in Taiwan will suffer from the exodus of Philippine labor.

Sooner or later, the diplomatic row will probably be resolved and dialogue between the governments will resume. What's unacceptable though is the abuse of overseas Filipino workers. Violence against migrant workers - both physical and emotional - must be condemned. The threat of financial instability faced by those whose contracts are just about to expire and those who are yet to be deployed is also damage already done.

But for my wife and I, the issue is much more than employment contracts. Our first daughter was born in Taiwan three months ago. If we stayed long enough to see her grow up and probably study here, we fear that our daughter will be labeled as an unwanted foreigner - among our other worries as migrant workers in another land. This is not to say that our problem is bigger than the hopes anchored by prospective OFWs (especially those who've paid agency fees) to a job in Taiwan. For us, the issue just got closer to home.
Read More
Newer Posts Older Posts Home
Subscribe to: Posts (Atom)