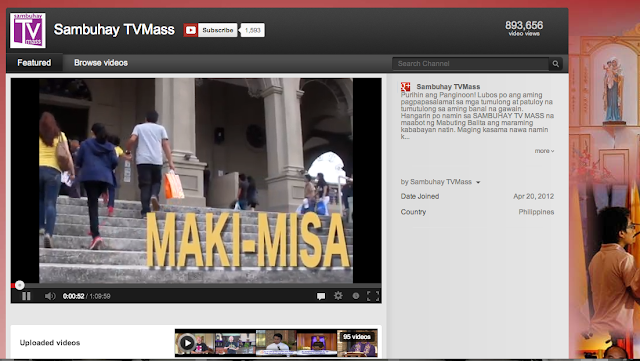 (Click the banner photo for the Sambuhay TV mass link.)

For most overseas Filipinos, it's not always possible to take time off at work to attend religious events and practice the faith. Also, churches and places of worship are sometimes few and far between where the overseas Filipinos stay - such as in the Middle East. With the Holy Week approaching, plan to spend a few hours to relive the Catholic tradition - right on your computer.

With overseas Filipinos in mind and other people who can't otherwise be present at Mass due to circumstance (the sick), the Catholic Bishops Conference of the Philippines makes possible an online Visita Iglesia. Be awed by grand Philippine Churches - from Batanes to Marinduque - through video walk-throughs and virtual tours. You can even perform a "Way of the Cross", complete with recorded prayers. You can also access YouTube-recorded Lenten sermons to reflect on this Holy Week.

Meanwhile, back in Manila, the Society of St. Paul, who also run TV Maria, hold (and upload) Catholic Masses for a YouTube audience. Watch the Sambuhay TV mass from this YouTube channel.

The Masses are shot in a chapel complete with choir and lector volunteers. Unlike some TV broadcasts, the camera work does not distract and help maintain the solemnity of the event. Also regularly recited in each Mass is a special Paulinian prayer for overseas Filipinos. Learn the words here:

St Michael, the Archangel
I am about to leave my family
and the physical and emotional
distance affects me.

The physical distance means
I will be living in a totally different
culture where everything will be new.

The emotional distance implies that
no longer will I be able to embrace
my loved ones when I want to.

You have done special mission
for God and you did it confidently,
trusting that everything will be
alright because our Creator has
everything in His hands.

Share with me the same faith.
Make this travel a part of my
mission here on earth.

While I am away from them,
protect them from dangers.
Let them feel my presence through
my letters and calls.

Make us a strong family even though
we are far from one another.

St. Michael, through your
intercession, may Jesus be the
Light of the family and
Mary be our Mother, too. 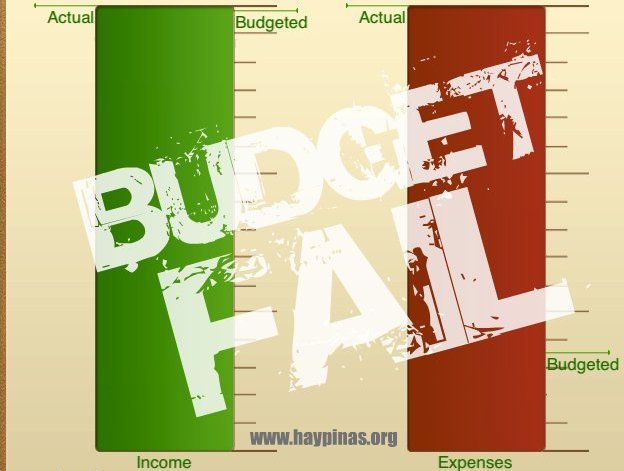 Since joining the bandwagon to work abroad, you’ve been earning four times as much than when you’ve stayed in the Philippines. Your pay slip proves this fact. But why then are you more cash-strapped and debt-ridden as ever?

Many new OFWs fall trap to the promise of a bigger salary when they set out for overseas jobs. But what most OFWs don’t realize is the equally huge money challenge that may accompany this deal.

If you’re a new OFW or planning to become one soon, don’t fall trap to these pitfalls.

In the Philippines, some things are arguably cheaper: rent, groceries, and even cab fares. Eating out and occasional movies won’t break the bank either. But if you find yourself in other corners of the world, be prepared if the price tags suddenly skyrocket.

A studio apartment might already halve your salary if you relocate to a big city, such as Hong Kong. Then there are the standard service charges and taxes that come with purchases. Even a simple haircut might cost you a few thousands in peso-terms.

Check the proportion of your income against your new place, and adjust your lifestyle according to what you can afford.

While tending to your expenses abroad, you’re probably also juggling financial obligations back home. If you’re raising a family or have dependents staying behind, their spending is intertwined with yours.

This means utility bills will always come in two, as are other basic necessities. Do you have a budget list of your regular expenses? If not, you have to make two of such right now. It’s also equally important that your family knows how to value the money you send so that your budget is met both ways.

Since you’re earning dollars, some friends and distant relatives might have no qualms in designating you as the go-to person for emergency (or not) appeals for cash. Especially if it’s a matter of life and death, such as medical predicaments, most OFWs would oblige to foot the bill. The long list of common SOS to OFWs includes tuition fees, home repair, to business capital.

When doling out loans, remember to only lend an amount that you can write off. It’s also good to have a fund for these kinds of requests. Don’t be guilt-tripped if you set a cap to what you can offer as help. Far too many relationships have been strained by money issues, which could only get worse because of the long distance.

Many OFWs succumb to the temptation of buying the latest gadgets, designer bags, and custom jewelries (sometimes charged to credit). And some are constantly stuffing their balik-bayan boxes with sundry items from rubber shoes to canned goods. It’s partly shopping therapy from the stress and overwork they face.

Having spent a huge part of their income compensating for their absence in the form of material goods, it’s no surprise that many OFWs head home with little to no savings at all. They then sell or pawn expensive items they’ve purchased at a fraction of the cost. So goes the cycle especially for those who have to shell out placement fees.

If you’re prone to impulse buying, hold tight to your wallet and ask yourself why you decided to work abroad in the first place. If it’s to secure your children’s education or to fund a small business, then bid adieu to that flat-screen TV for now.

You might think that a pre-selling two-bedroom condominium unit might be the perfect investment for you. After all, the interest rate is waived and you have ten years to complete the payment. Or not – if you’re only on a three-year work contract abroad.

If there’s uncertainty that you would be getting the same income that you have from your overseas job in the long-term, it’s best to forego big-ticket investments if it’s going to cost you future headaches. You can focus on mutual funds or the stock market rather than commit to resource-straining investments such as real estate.

Far too often, money matters sidetrack OFWs from enjoying what living and working abroad can offer aside from fatter paychecks. Guard yourself from these common pitfalls – peace of mind is priceless.

------------ oOo ---------------
This article was previously published by Angat Pilipinas Coalition for Financial Literacy, of which www.HayPinas.org is a supporter. Angat Pilipinas is a coalition of individuals and organizations dedicated to improving the financial literacy of the Filipino youth, artists, and overseas Filipino workers (OFW's) by providing advocacy, research, standards and educational resources.
Read More
Newer Posts Older Posts Home
Subscribe to: Posts (Atom)