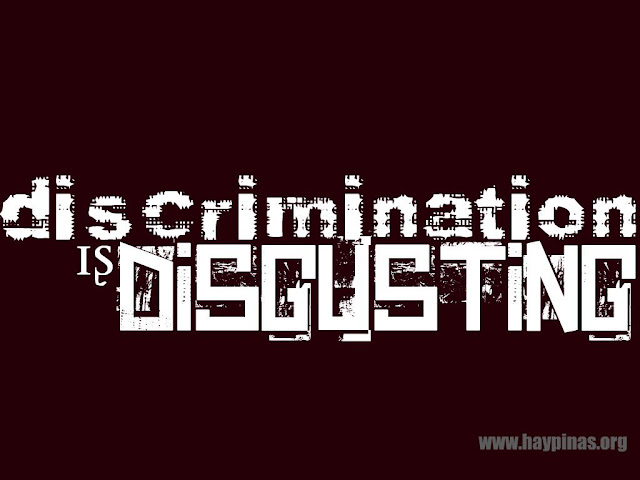 "No to foreign workers in our community."

Banners with those words hang somewhere in Bade City, Taoyuan County in Taiwan. The sentiment effectively drove away 30 "dark-skinned" Filipinos out of Rueilian, a community of 460 households. The Taipei Times reported that some 1,000 local residents petitioned Ablecome Technology, the company who hired the foreign workers, to house the Filipinos elsewhere but in their community.

In effect, the migrant workers - who have arrived in Taiwan just two weeks before - were doubly displaced. For most of these Filipinos, the lure of higher salaries than what they could get back home forced them to make the difficult decision to work abroad. But rather than welcomed by their new host society, they were shooed away as an unwanted group by a self-described "peaceful community."

The reason for the petition basically boils down to the Filipinos' "dark skin." As quoted in the newspaper report, Taoyuan County Councilor Lu Lin Hsiao-feng has this to say about the incident: "[Locals] are merely worried that clashes could happen because of these foreign workers, with their different skin color and different culture, going in and out of the community."

Dark skin alone - a "safety concern" brought about by the Filipinos' otherness - is the main reason for the migrant workers to be expelled from the Rueilian community. None whatsoever of disorderly conduct, suspicious activity, or any misdeed. Mere color, pigment, melanin. This is racial discrimination rearing its ugly head. The excuse made by the government official just made the incident a whole lot sadder.

There's darkness that's really dangerous, and it's not skin-deep. It's darkness from a place of ignorance and intolerance. In a world where borders are opening up and technology is broadening horizons, there's no reason to harbor unfounded fear and prejudice. Taiwan is a major world player in developing cutting-edge technology. But as manifested by the incident, the attitude of a segment of its people needs catching up with the rest of the globalized world.

The most cosmopolitan societies are a melting pot of cultures. Ideas, art, and innovation thrive when diverse backgrounds intermingle. In some advanced societies, multiculturalism is even a highlight of school curricula. Had the Rueilian locals been more open to diversity, they would have learned sooner or later that Filipinos, although coming from a poorer country, are no less intelligent or talented than the next person on the street. Discrimination is disgusting, wherever part of the world it is committed.

One week after the news report "Local community petitions foreign workers to leave" was published, the article still ranks as among the most read and shared in the Taipei Times website. Foreigners and locals alike expressed outrage in the comments. A few dismissed the issue as an isolated case, although the article cited two other recent examples of discrimination. For whatever it's worth, the incident encouraged people to talk about racism and bigotry in Taiwanese society.

Was there an attempt by the petitioning group to reach out and communicate with the migrant workers? Maybe a simple dialogue with the migrants would have reassured the Rueilian locals that they have nothing to worry about. But that's only likely to happen if fear and loathing don't take precedence over common decency. Wherever they found temporary home, the work that those migrants will do ultimately services the Taiwanese company that hired them for jobs that locals couldn't care less for.

Have you ever experienced discrimination as an overseas Filipino? What happened and how did you react? Share your thoughts on Hay Pinas! Forums.
Read More
Newer Posts Older Posts Home
Subscribe to: Posts (Atom)