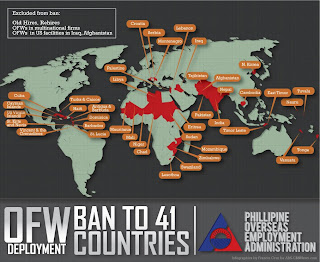 And so the overseas Juan dela Cruz is caught in a tangle once again.

Last week, the Philippine Overseas Employment Administration (POEA) issued GB Resolution No. 7-2011, which lists the countries that overseas Filipino workers are banned from being deployed to. The government has identified 41 non-compliant countries. This could affect soon-to-be-deployed OFWs and current workers who plan to renew their contracts in the said countries. At the heart of this issue is the financial stability of their respective families.. This is yet another ordeal that migrant workers have to face. For the undocumented ones, it gets more complicated if not desperate.

Eric Bellman of The Wall Street Journal reported that the "Manila ban has no bite", saying that there's comparatively fewer Filipinos working in these countries. Even POEA chief Carlos Cao, Jr. agrees. How might 25,000 overseas jobs hurt the Philippine economy, and the countries that need these workers? Many online pundits have already expressed their disbelief and complaints against POEA's D-list. And these complaints are from PEOPLE (not products that can easily be recalled) worried about not finding work back home and not bringing food to the table.

Most of us do see the value in statistics, don't we? And this may just be about statistics after all. The Philippine government finds itself incapable of closing bilateral agreements with the 41 countries, leading to higher statistics and probability of abuse and casualties. The solution? Label them as "unfriendly" or peg these countries with skull-marked flags on the map so that everybody knows exactly what they're getting into.

But doesn't statistics also show that countries like Saudi Arabia (with close to two million OFWs), United Arab Emirates, and Qatar are also not exactly OFW-friendly? They're not mentioned in the resolution at all - possibly because remittances from these countries count as more valid statistics.

The fact remains that even if you ban countries, people who can't find decent jobs at home will grab every opportunity they can find regardless of consequence (read: war, famine, or even pirate-infested seas). And just because the government has decided to put horse blinders on, it doesn't mean that the multitude of abuse experienced by OFWs will also just cease to exist.

There's got to be a more sustainable plan than just separating the good and the banned. If we really want to stay true to the intent of GB Resolution No. 7-2011 - that is, to ensure that "rights of Filipino migrant workers are protected" - then we recommend to strike out the word "overseas" and make the Philippines as the 42nd item on the list. 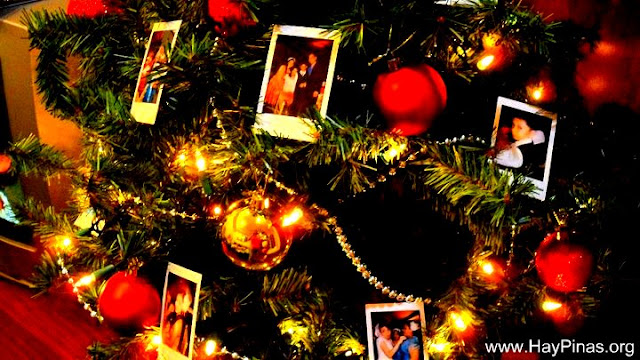 "Seeing leaves falling from trees makes me lonely," I sighed as my husband and I walked to the 7-11 store near our place for breakfast and morning paper. It's pretty seeing it in paintings but not all that when I'm walking through a row of bald trees and dead leaves on the ground.

Raymond claims I have SAD (Seasonal Affective Disorder), meaning that a particular time of year makes a person ...uhmmm... sad. It may be true. However, as an overseas Filipino, my season of loneliness is not autumn or any among the four seasons of other countries. It's just plainly because fall means Christmas season is near.

And Christmas for most overseas Filipinos is a very strong cue word for homesickness. Especially when your family and friends are starting to plan for Christmas meals and get-together. Facebook doesn't make it easier, either. Just this morning I saw a photo of Puto bumbong that my classmate has been eating!

Nonetheless, I'm just a whiner. Even though Taiwan doesn't celebrate Christmas, I'm still a cheap plane ride away from our dear country. There are thousands -- if not millions -- of us who see Christmas as an eternity of torture. To those who are miles and miles away. Those who need to work on holidays. Those who take care of other families than their own. Those who don't have dinner or money to spend. Those who are cold, sick, or helpless. Those who are in prison. Those who are abused. Even those who are going back home jobless and empty-handed.

My dad, who spent seven years in Saudi, told me once that loneliness is the most difficult emotion to handle. It really is. It's like being one of those trees which see something that's part of them wilt and blown away.

The beauty in seasons, though, is that you'll expect it to end at some point. So, to those who are alone and lonely abroad:
We'll be counting the days to that Christmas with you!
Read More
Newer Posts Older Posts Home
Subscribe to: Posts (Atom)