Working Harder to Get Lucky: Lessons from OFWs 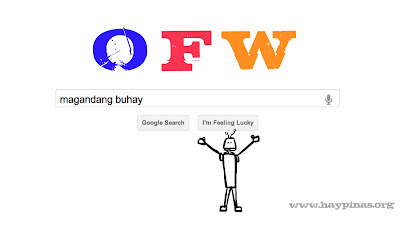 I ended my night yesterday with a nice piece of advice from Tina Seelig's book, What I Wish I Knew When I was 20:

"Josh's comments on luck echoed the message I frequently heard from my father when I was a child -- the harder you work, the luckier you get. His mantra was a stark reminder that you need to put yourself in a position to be lucky. Even if there's a low probability of success and a tremendous amount of competition, you can maximize your chances by being well prepared physically, intellectually, and emotionally."

I believe this to be not only a true but also a very important lesson we should consider. How each of us define luck vary from one person to another. To some, luck can be winning 20 million pesos, while others call themselves lucky when they find a lost coin. If you ask me ten years ago, I'd associate luck as a conspiracy of celestial bodies we have no control over. Now, as this question lingered in my mind from last night, I remembered a true-to-life OFW story from a dear friend. Let me share it with you:

Three decades ago, many have tolled the vast deserts of the land of the black gold. Among these bold-hearted soldiers were three dads who, deep down their hearts, only wanted to give their families constant supply of food on the table and a few gifts for their kids to open every Christmas.

They started their dream like every one else. Patiently, they stood in long lines under the scorching sun and saved every penny they could for their journey. That's why, they couldn't believe it when they heard the news that they were chosen to embark on such mission with a decent wage and benefits. It was all good, lucky they said. Even though they're spending few years in a foreign land, they will be able to provide for their precious ones.

Now you see, if I stopped at this point in the story, we'll think that all three of them are now back in their home town enjoying the fruits of their labor. But of course, this isn't a story about hard work. It's about all luck, so let's continue.

The first dad is still diligently working and could not yet go home because there's still a lot of bills to pay, including the tuition fee of his 25-year old kid who's halfheartedly finishing college. He wanted to give everything to his family, even if the cost is not having to spend time with them even for one solid year.

The second daddy went back home after 10 years with a long list of unpaid debts. He continued working in the Philippines but, with lesser opportunities, he struggled. Although he was able to have their kids graduated, they weren't able to plan their retirement. He wanted to give everything to his family, and it didn't matter if they splurge it all.

It was a different story for the third dad. He and his wife planned their finances, agreed to how long they were to be separated, and stuck with the plan since day one. Sure, they had a few bumps, but when the third dad came back home after seven years, they had enough to start anew. Now that they're closer to retirement age, they are calm as a rock. This dad wanted to give everything to his family, and exactly knew what EVERYTHING meant. To this couple, everything was a good shelter, food on the table, education for their kids, a set of sturdy investments, and time with each other.

One day, the first dad called the two dads and said that he'll be visiting and they should see each other for old time's sake. All three of them had good food, good laughs, and great stories of the past endevours. As they separated their paths again, the first two dads sighed after seeing the third dad all settled, happy and relaxed. They couldn't figure out what went wrong, and consoled each other with the thought that the third dad was just too lucky.

In this story, all three dads are hardworking, no doubt. But is the third dad luckier than the two? If the answer is yes, then our country doesn't have enough lucky OFWs.


P.S: Although we see other people 'luckier' than us, find comfort in the thought that we all are blessed.
Read More 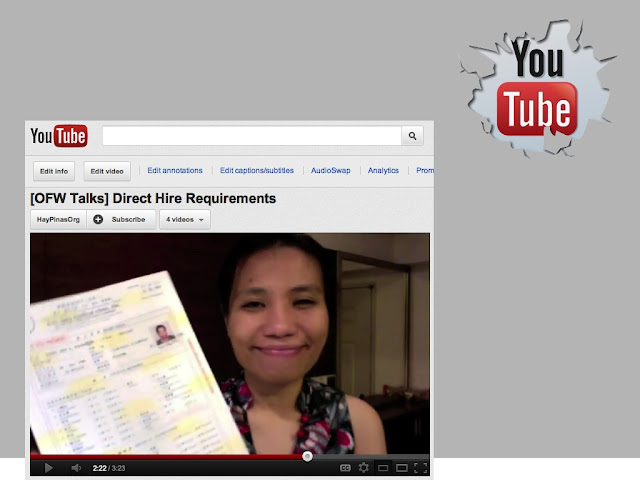 So you have an offer to work abroad? Here are some of the things that you should do next (as we have experienced it). Remember to always check with the concerned agencies for the complete requirements, and make sure that your offer is legitimate.

Phase 1: GET NOTARIZED CONTRACT FROM YOUR FOREIGN EMPLOYER Phase 2: AUTHENTICATE DOCUMENTS SCHOOL DOCS WORK DOCS SUBMIT DOCS TO EMBASSY ETD: 15-21 days. Phase 3: ASK FOR WORK PERMIT FROM YOUR COMPANY ETD: Up to 10 days. Phase 4: APPLY FOR A WORK VISA Please make sure to contact or visit the embassy's website to find out other requirements that you need to complete before applying for a work visa. Prepare for your interview. Phase 5: GO TO POEA FOR YOUR PDOS AND OEC To avoid immigration problems, it's best to get your Overseas Exit Clearance / Overseas Employment Certificate from POEA. We can't guarantee, however, that it'll be a smooth ride as there might be other requirements that you need to complete. In Anne's case, for example, POEA required her to get No-Objection Letter from all the six recruitment agencies that her company is listed with (which took her more than a month to complete). We recommend this article for further reading.
Read More
Newer Posts Older Posts Home
Subscribe to: Posts (Atom)