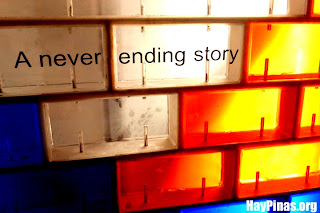 A quote “Where I’m from everyone’s a hero” is becoming more and more hailed — after tragedies that shook the country. And such tragedies always bring the best in people or a race. We learn to extend a hand, we make sacrifices, or just simply find ways to help others survive the day.

The quote is really inspiring and it’s what my country needs. The thing is, I can’t fully embrace this idea because we have been sunk for a long time — long before Ondoy’s wrath. And what good is a hero, if one cannot save himself or herself?

I think we, as a nation, still have this romantic idea of heroism. One has to die. One has to win a battle (or a boxing tournament and singing contest). One has to leave the country and endure being alone in a foreign land. One has to be recognized by the entire world. One has to be kidnapped. And other things that would seamlessly fit the plot of Kill Bill 3.

To cut to the chase, I’d rather hear these quotes from my country in the near future:

I’d rather have an entire generation of these people than a handful of exceptional heroes suffering and dying in vain.
Read More
Newer Posts Older Posts Home
Subscribe to: Posts (Atom)